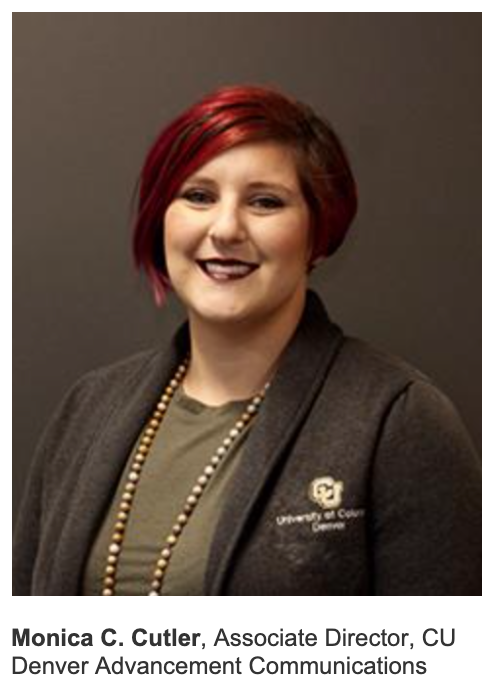 Is knowing the time during which your audience is most likely to engage with an email an art or a science? That’s the question CU Denver eComm user Monica Cutler wanted to answer both in her MPA capstone and in her donor communications. “Often, much of the work that we do can be based on assumptions,” Cutler states. “We think we know that our audience won’t read emails on weekends or that morning sends are better than afternoon ones. But what if these assumptions aren’t correct?”

As a key member of the donor communication team, Cutler wants to be sure that her team isn’t relying on old assumptions or outdated data when it comes to increasing constituent engagement. While eComm data is helping in doing that, the recent rollout of the “When are my emails performing?” dashboard was a game changer. Rather than having to comb through spreadsheets of email send data, the dashboard presented relevant data to guide Cutler’s decision making in an easily accessible, digestible format, which is key, she says, in talking about data-based strategic decision making with her team.

“While not every send has the option of a flexible date or time, the dashboards have informed decision making for the ones that do,” Cutler says. “They allow us to move from intuition and memory-based decision making to a more strategic approach to email outreach. The data changes our conversations about when we will send certain types of communications and refocuses the conversation on not the speed at which we will deliver a message, but when that message is most likely to generate engagement based on our goals.”

While some assumptions can of course be correct, the dashboards have led Cutler and her team to a few surprises on the way. For example, they thought that early morning sends are more effective since they appear in an inbox at dawn was proven incorrect; for Cutler’s team, afternoon sends often yield better results. And testing certain sends on weekends had revealed that Saturday and Sunday shouldn’t necessarily be blackout communication days but could be used strategically to open communication channels on other days of the week.

The biggest surprise? The data changes over time, so challenging assumptions isn’t a one-time deal. “We’ve seen the data change month to month, seasonally, and during key times of the year, such as the start of the fall semester. Reviewing the data regularly allows us to modify our strategy based on the most recent constituent behavior rather than relying on outdated information.”

While Cutler and her team will continue using the dashboard data to inform their donor outreach, they are hoping to expand the data-based approach to decision making to different audiences and channels as well, such as alumni engagement and social media marketing. The lessons learned will inform their mass communication plan for the coming year.

“Don’t make decisions based on your best guess when you don’t have to,” Cutler recommends. “Use the data you have to make outreach and engagement decisions, and you’ll see the results.”