Categorized in:
Migration to QA

PROJECT CF AR TYPE is no longer maintained by CU, so m-Fin is changing what displays in project headers.

With PeopleSoft 9.2 CU is using PROJECT BILL TYPE.  It's a three character code.  The first character is a digit indicating campus. The remaining two characters indicate the billing type.  Here are some examples:

We are adding some other project data elements while we are at it, that we have heard will be helpful.  These include PROJECT TYPE and PROJECT BILLING LIMIT.  This image shows and example of the new header: 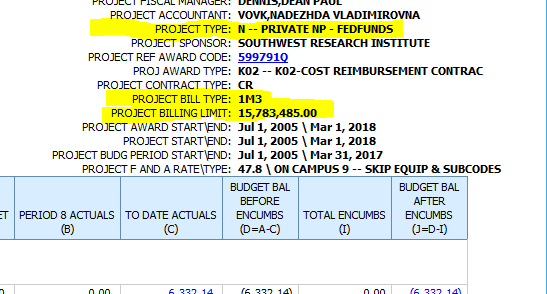 When there is one, the billing limit is almost always the same as the budget.  We have added it to the project header because the people who work on your billing appreciate seeing the limit displayed separately, so there is no wondering about it.

m-Fin already had its own data element called PROJECT TYPE, available as an optional prompt in some reports.  To avoid confusion with the PeopleSoft data element of the same name that is now going into the header, we are changing the m-Fin data element name to PROJ AVAIL BAL TYPE.

Here are the reports with project headers.  Try them now in Cognos QA.  Unless we hear of problems we'll migrate them to production at the end of this month (February, 2017):

These other reports also are changing, but more subtly, either because they have always had simpler headers, or because do not actually have project headers.  We welcome your testing of these as well:

Sarju and I would like to thank Denver|Anchutz's Barb Hayes for her guidance as we have worked on these changes.