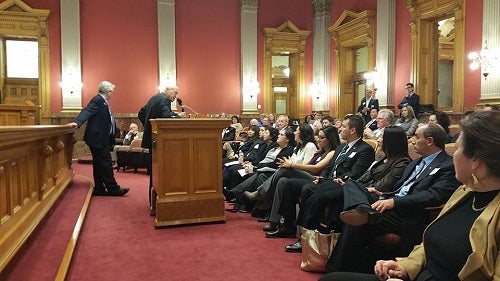 Aerospace Day at the Capitol

CU students set up a booth for Aerospace Day at the Capitol, which gives CU Aerospace students and faculty the opportunity to showcase their research and program opportunities. During the March 21st event, a CU student, wearing a space suit, was a special guest on the Senate floor. 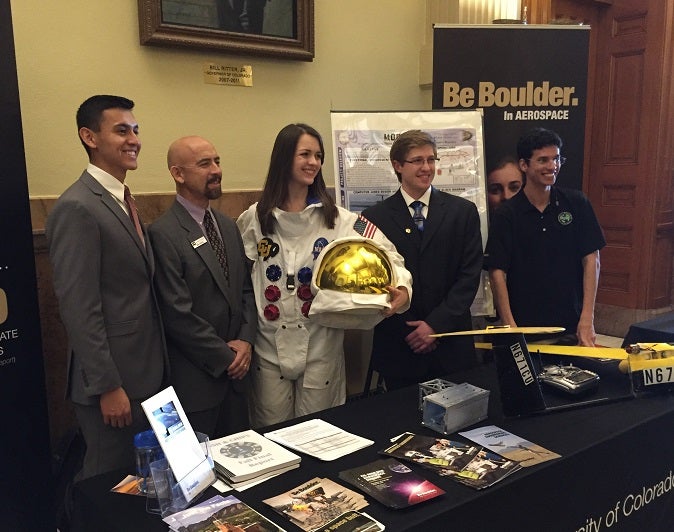 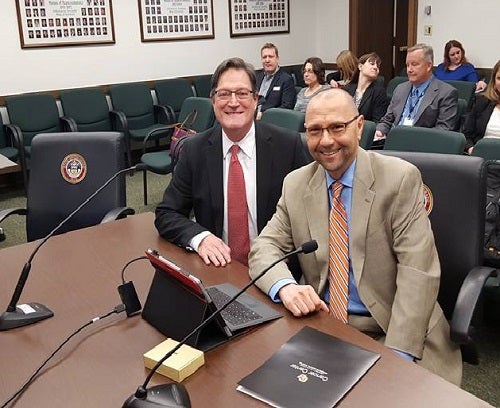 The Pink Life Saver Mobile Mammography van and Mobile Stroke Treatment Unit parked at the Capitol as part of the UCHealth Advanced Care Close to Home Day. The Pink Life Saver Van is a clinic on wheels that provides breast cancer screening services to women. Legislators were encouraged to tour the electric-pink, 38-foot bus that travels to several locations in the metro Denver area each week. The skilled and compassionate UCHealth mammography professionals performed several mammograms for women.

The Mobile Stroke Treatment Unit, one of only three such units in the U.S., is a revolutionary medical service and research initiative in Colorado. The unit looks like an ambulance but is a specialized emergency department on wheels, designed to deliver expert stroke care to patients. The April 13 event was sponsored by Senator Mary Hodge (D-Brighton), and Representatives Kevin Priola (R-Henderson) and Dianne Primavera (D-Broomfield). 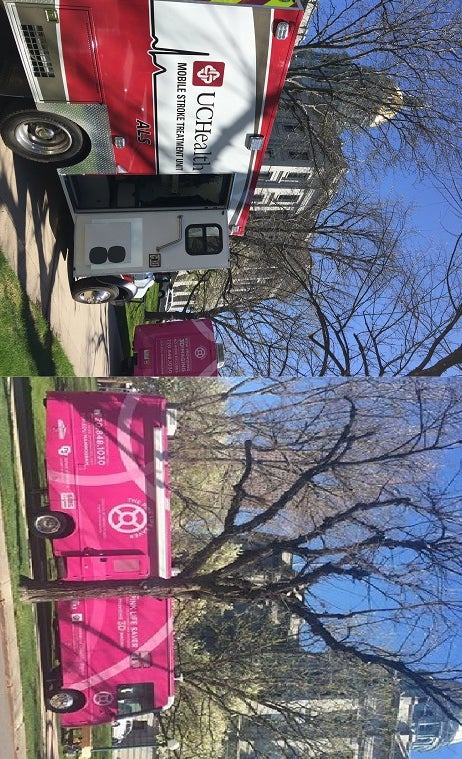 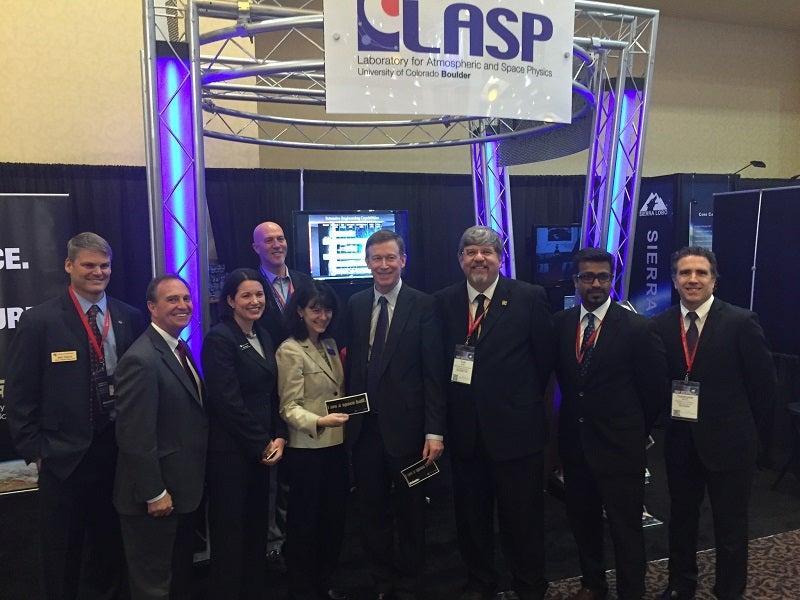 Chris Koehler and Brian Sanders, Director and Deputy Director respectively of the Colorado Space Grant Consortium (COSGC), met with science staff for all nine members of Colorado’s congressional delegation. Koehler and Sanders were joined by Christy Predaina, a CU-Boulder and COSGC alum, who is still engaged in the program through mentoring and other activities. The Colorado cohort were part of the March 2 national Space Grant advocacy day on Capitol Hill, which included representatives from each of the 52 Space Grant programs. The COSGC is funded by NASA and is a statewide organization involving 20 institutions of higher education, including CU-Boulder. COSGC provides Colorado students access to space through innovative courses, real-world hands-on telescope and satellite programs, and interactive outreach programs. 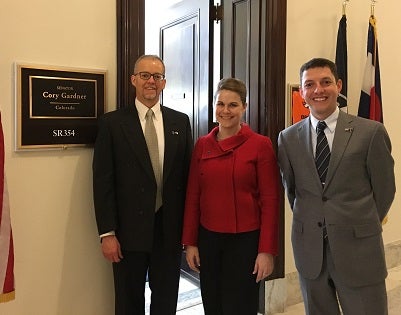 Dan Baker, Professor and Director of CU-Boulder’s Laboratory for Atmospheric and Space Physics (LASP) moderated a panel discussion entitled “Space Weather: What Is It, What Can We Do About It, and Why Should You Care?” on Capitol Hill. CU-Boulder sponsored the March 31 briefing and Congressmen Ed Perlmutter and Jim Bridenstine served as honorary co-hosts. In addition to Baker, expert panelists included Harlan Spence, Professor and Director of the Institute for the Study of Earth, Oceans and Space, University of New Hampshire; Michael Ryschkewitsch, Space Exploration Sector Head, Johns Hopkins University Applied Physics Laboratory; and Cory Springer, Director of Weather and Environment, Ball Aerospace. The panel spoke to a crowd of more than 50 congressional staff and stakeholders on U.S. capacity to understand, predict and mitigate the impacts of space weather events. 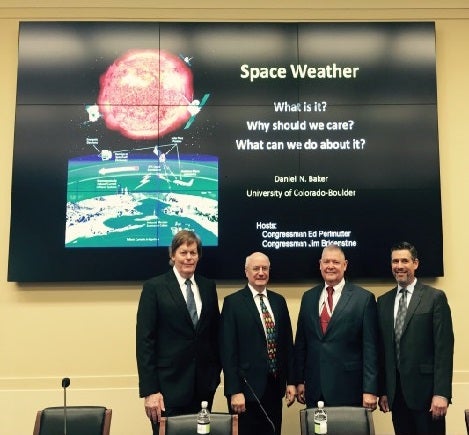 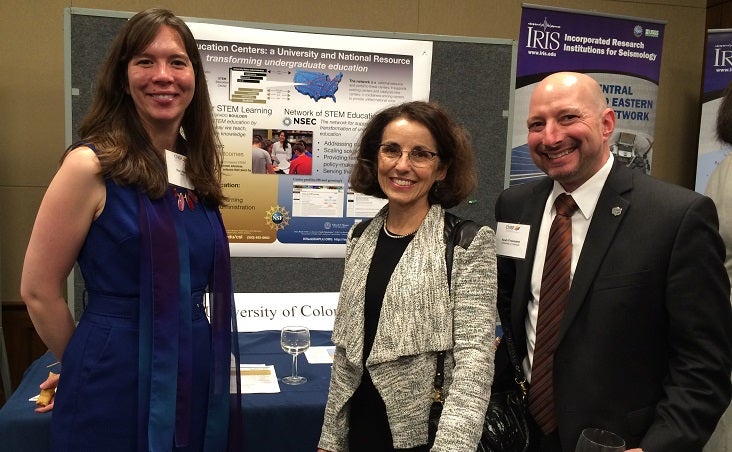 U.S. Senator Cory Gardner spoke at a “Headliner Breakfast” for The Science Coalition, a non-profit, nonpartisan group of the nation’s leading research universities, including CU-Boulder. Gardner described his interest in science policy and updated the group on the Senate effort he is co-leading to reauthorize the America COMPETES Act, which governs research, engineering, and education programs at the National Science Foundation (NSF), National Institute of Standards and Technology (NIST) and Department of Education (DOE) Office of Science, as well as federal Science, Technology, Engineering, and Mathematics (STEM) programs.

Regarding that effort, Gardner said he values stakeholder input and wants to craft legislation that will build transparency, accountability and understanding. He also hopes to incorporate more stability into the grant-making process, perhaps allowing for more multi-year awards. Colorado was well-represented at the event with participants from CU-Boulder, Colorado State University, and the University Corporation for Atmospheric Research. CU-Boulder’s Peter Pilewskie and Tom Sparn from the CU-Boulder Laboratory for Atmospheric and Space Physics (LASP) served as honorary hosts, introducing the Senator. While in DC, Pilewski and Sparn also met with members of the Colorado delegation to give a progress report on the Total Solar Irradiance Sensor (TSIS) program. 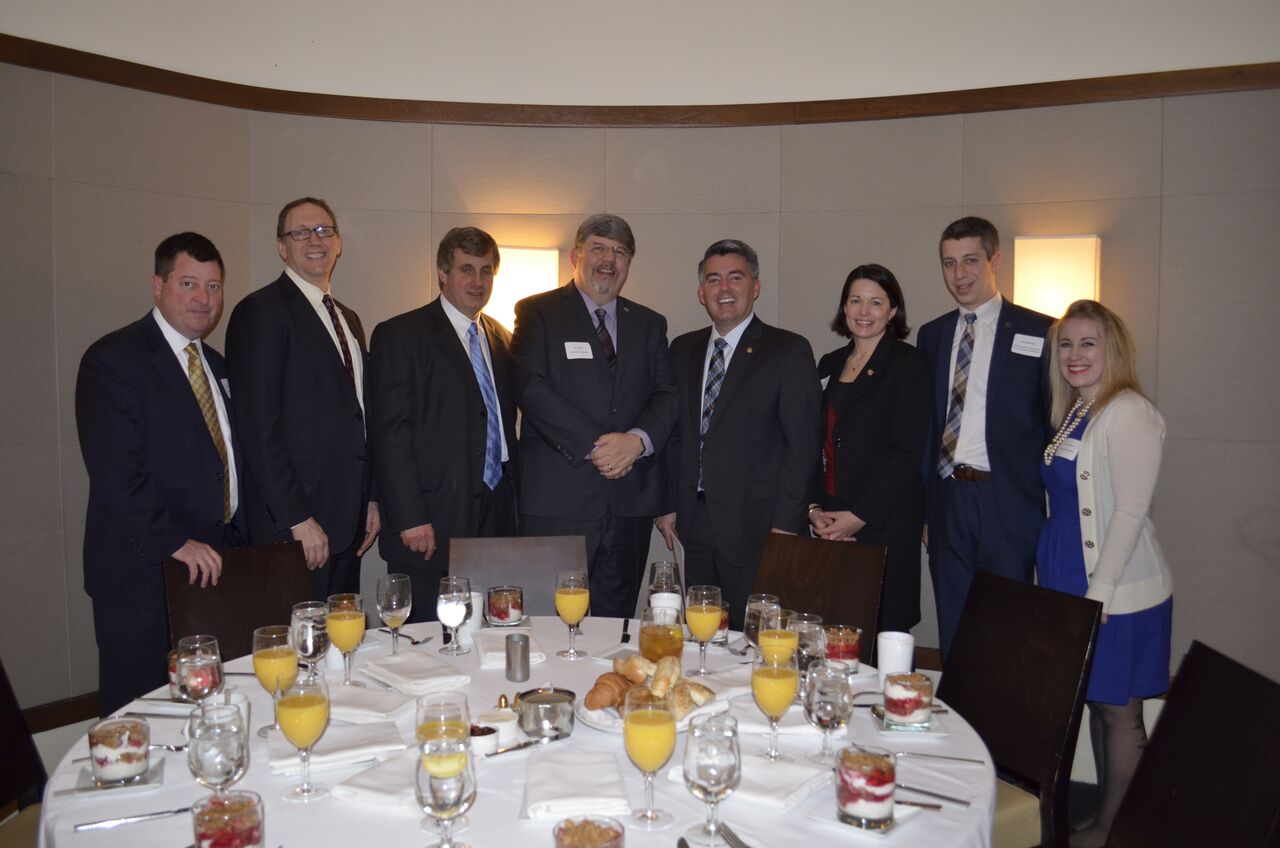 Congressman Jared Polis visited the University Memorial Center at CU-Boulder and held two roundtables with higher education administrators and the CU-Boulder Student Government. During the first roundtable (with officials from CU-Boulder, Colorado State University, and Front Range Community College in attendance), Polis gave a brief update on the reauthorization of the Higher Education Act (HEA).

Polis related his belief that HEA reauthorization will not see significant movement until early 2017, which corroborates the Office of Government Relations' expectations for the legislation. Polis closed the roundtable by outlining his 2016 education priorities and fielding questions from attendees, which included discussions on dual-enrollment, open source textbooks, campus safety, work-study programs, and housing costs.