State and Federal Relations: A Look Ahead at 2018

State and Federal Relations: A Look Ahead at 2018

The 2018 legislative session is set to convene on Wednesday, January 10th.  The State Relations team has worked over the interim to continue cultivating relationships with legislators and promote the endeavors of each of the CU campuses through tours, meetings and outreach activities in legislative districts. This work is critical to our efforts during the 2018 state session as we work to support funding increases for higher education, CU’s legislative priorities and also navigate through legislation that will impact the Institution. As always, we rely on the critical feedback of our campus experts on how legislation will impact CU’s operations.

We are very thankful to the Governor for his continued support of higher education that was announced in his budget request this November. The request included an overall increase for higher education in FY 2018-19 of $86.9 million, or 9.7%. This total includes $56.8 million for governing boards to be allocated through the state’s funding formula. CU would receive about $18.9 million, or about a 10% increase. The request also includes important increases for capital construction. Importantly for CU, the request includes $12.3 million for the CU Anschutz Center for Personalized Medicine and Behavioral Health (ranked #10) and $15.1 million for Level 1 Controlled Maintenance.

We will be working closely with Vice President Todd Saliman and his team to support the Governor’s request. However, there are several other budget pressures and policy issues that will need to be worked out during the legislative session that can still impact the final higher education allocation, such as transportation and infrastructure needs, healthcare, and PERA solvency. Because of our lobbying efforts on the Hospital Provider Fee bill last year, there is more money available.

"We are excited to embark on the 2018 legislative session and we look forward to working with our friends in the legislature on both sides of the aisle on issues that are important to CU," said Tanya Kelly-Bowry, Vice President, CU Office of Government Relations. "We will be running key legislation to benefit the CU System and will also work on key funding initiatives that are made possible by the critical Hospital Provider Fee Enterprise legislation that passed last year, SB 17-267. With a minimum of 500 bills introduced each session, we also look forward to working with our campus stakeholders to collect feedback and engage in the policy making process.”

The Federal team had an eventful 2017. There were many changes in the political landscape that the team, along with many representatives from all the CU campuses, addressed with the Colorado congressional delegation as well as federal agencies throughout the year.

A top issue at the end of the year involved the Tax Cuts and Jobs Act (PL 115-97). In December 2017, Congress approved and President Trump signed into law this sweeping tax code overhaul that will have lasting impacts on higher education. The measure was approved along party lines in both the House (224-201) and Senate (51-48). Fortunately, lawmakers heeded many of CU's concerns and removed some of the most difficult and costly provisions for students and families from the bill. The federal team coordinated with CU leadership, students, alumni and other advocates to ensure CU's concerns were addressed as the legislation was debated and modified. The overhaul progressed at an extremely fast pace, lasting less than two months from bill introduction on November 2 to becoming federal law on December 22. As such, university advocates had to mobilize quickly and effectively to influence the outcome. This happened at all levels of the university. For instance, President Benson and all four Chancellors voiced their concerns to the Colorado congressional delegation in a letter to the Colorado's House delegation, a letter to Senator Michael Bennet and Senator Cory Gardner, as well as through personal outreach; CU Advocates from across the country engaged directly with their own lawmakers; CU students hosted demonstrations and passed resolutions on policy areas of concern; Regents Sue Sharkey and Jack Kroll traveled to Washington, DC to raise CU's concerns face-to-face with Colorado lawmakers; among many other activities.

As a result, the law preserves many important provisions in the tax code that help students and families. Most notably, the legislation maintains the tax exemption for qualified tuition waivers, including for graduate teaching and research assistants, as well as university employees and their dependents; the student loan interest deduction; the $4,000 above-the-line tuition reduction; the tax exemption for up to $5,250 in employer-provided tuition assistance; the American Opportunity Tax Credit; and the Lifetime Learning Credit.

However, not all of the provisions affecting higher education were changed. While the new law preserves the charitable giving deduction, it's nonetheless expected to decrease charitable donations to universities and other non-profit organizations by doubling both the standard deduction, which will reduce the number of itemizers, and the estate tax exemption. It likewise eliminates the charitable deduction for seat-license fees at college sporting events. In addition, while the law retains tax-exempt private activity bonds to finance public infrastructure projects, it completely eliminates the use of advanced refunding bonds, which CU has previously used to save millions in borrowing costs. The new law is also expected to increase regulatory burden and costs associated with university income derived from activities that aren't directly related to the academic mission. Among the new provisions receiving the most public attention is a new tax on private college endowments. While this provision will not impact CU as currently written, we remain concerned about the precedent set by the decision to tax university endowments. Finally, the new law limits the size of the state and local tax deduction, which could make it more challenging for states like Colorado to generate the revenues needed to support public universities.

The federal team will be monitoring how the new law is implemented, its impacts on state revenues, as well as how CU should prepare to comply with any new mandates.

Another important piece of legislation to CU was the Higher Education Act (HEA) reauthorization bill, advanced by the House Education and Workforce Committee on December 12. The Promoting Real Opportunity, Success, and Prosperity through Education Reform (PROSPER) Act (H.R. 4508), which makes sweeping changes to higher education and student aid programs was approved by the committee along party lines by a vote of 23 to 17. A number of national higher education associations have expressed concerns that the legislation will make higher education more expensive for students and families, among other issues.

During the committee markup, which lasted 14 hours, Congressman Jared Polis highlighted CU Boulder's "Be Boulder Pact" as a successful model for reducing cost, increasing transparency, and creating predictability for students about the cost of their degree over time. Chairwoman Virginia Foxx has said she wants to see the PROSPER Act voted on by the full House early this year.

Reauthorizing HEA is also a top priority for Senator Lamar Alexander, who chairs the Senate education panel, which Senator Michael Bennet also serves on. The Senate is expected to unveil its reauthorization bill early this spring. Final legislation adopted by Congress is expected to look more like the Senate package. Read more on how Washington could shape higher education in 2018 here.

We know many university employees will be engaged with legislation through various associations or personal interests, which is an important part of the public policy process.  Endeavors that are outside of CU’s official priorities or not done through Government Relations need to be done on personal time. There are guidelines in place for both State and Federal lobbying policies, guidelines on inviting Government Officials to campuses, and guidelines on campaign-related activities. More information can be found on our website, and employees can always contact our office with any questions. 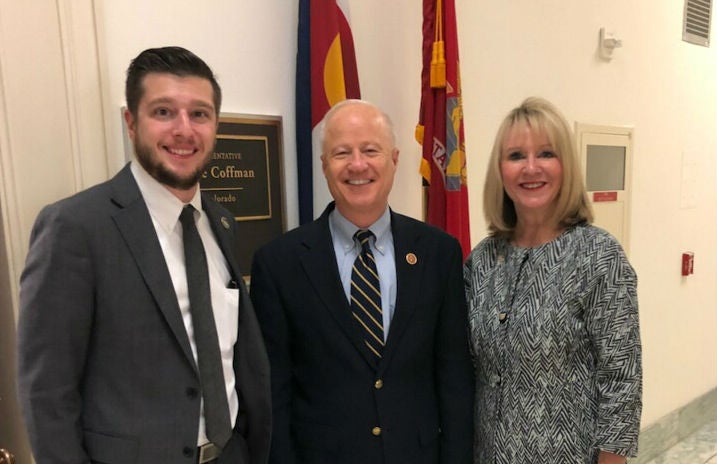