2018 State Legislation
As of August 8th, all bills signed by the Governor from the 2018 state session are in effect. Please follow this link to the list of bills that affect or are of interest to the University of Colorado. If you have questions about implementation, please contact your campus legal department or Jeremy Hueth in University Counsel at jeremy.hueth@cu.edu.

CU Boulder LASP in DC
CU Boulder was represented by Dr. Thomas Berger, Director of the Space Weather Technology, Research, and Education Center (SWx-TREC) and Edgar Johansson, Manager of Strategic Initiatives at the Laboratory for Atmospheric and Space Physics (LASP), when they went to Washington, D.C. During their visit, they met with the offices of Senator Cory Gardner and Congressman Ed Perlmutter, as well as staff from the House Science, Space, and Technology Committee and the Subcommittee on Environment/Committee on Science, Space, and Technology. The purpose of the meetings was to update staff on space weather efforts and the topic of space traffic management. 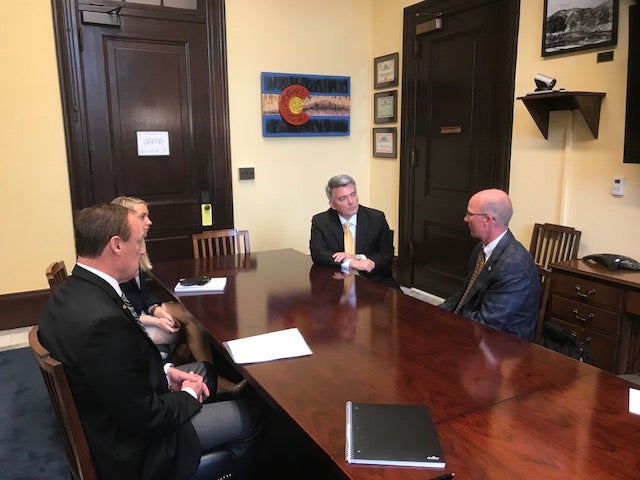 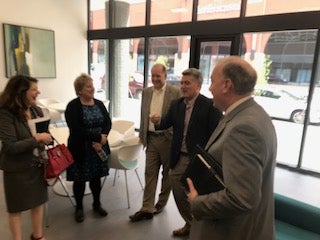 Congressman Coffman at CU Anschutz Medical Campus
Congressman Mike Coffman met with leadership and medical experts at the CU Anschutz Medical Campus to learn more about the work being done to combat Alzheimer’s disease. Chancellor Don Elliman and Dean John Reilly, Jr. welcomed Coffman to the Rocky Mountain Alzheimer’s Disease Center (RMADC), where the Congressman was updated on how legislation such as the BOLD Infrastructure for Alzheimer’s Act (S.2076) and the Palliative Care and Hospice Education and Training Act (PCHETA) (H.R. 1676) would impact the center. Representatives from the Colorado Alzheimer’s Association and the Global Down Syndrome Foundation were also in attendance. 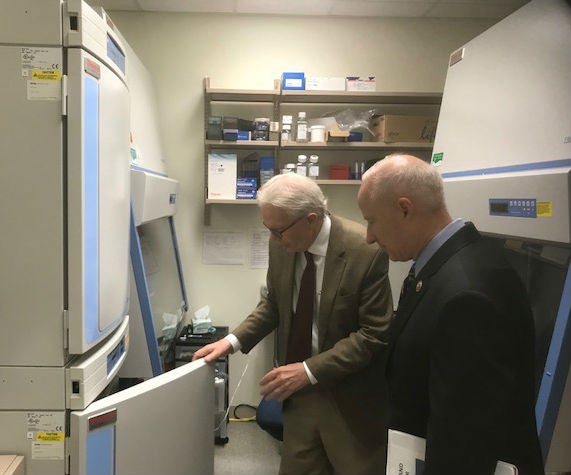 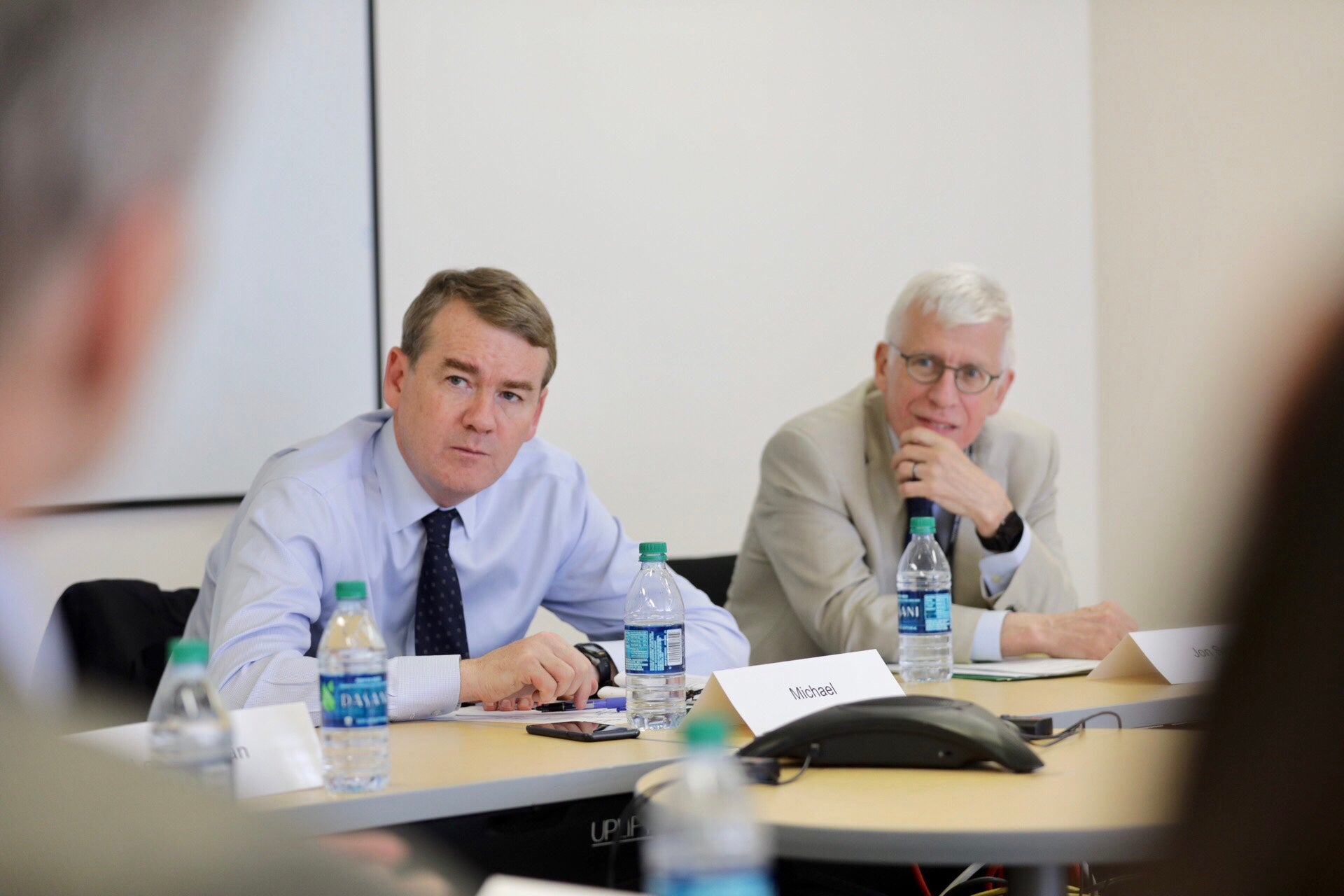 Senator Bennet's Office Meets with CU Denver CIBER
Constituent Advocate Tom Farrell with the office of Senator Bennet met with CU Denver’s Center for International Business Education and Research (CIBER) in August to discuss international business education and the CIBER’s work with student veterans through the CIBERVets program. The CIBERVets program is a collaboration between the Business School and the Office of Veteran and Military Student Services that offers students opportunities to gain knowledge and understanding in international business. 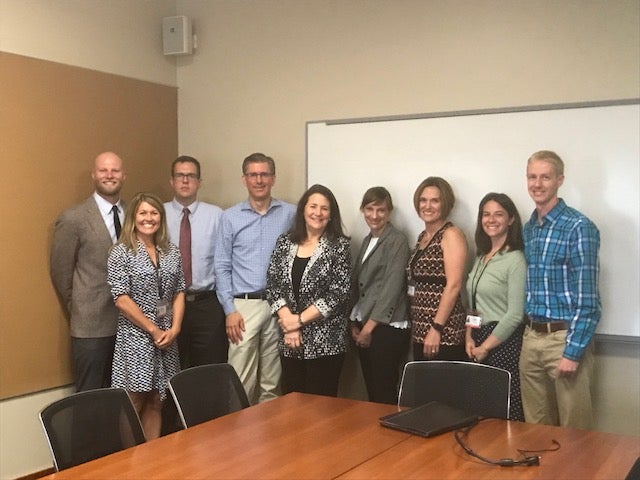 Congress Completes Work on Five Spending Bills, Boosts NIH and Other Research Agencies
For the first time in 22 years, Congress completed work on a Labor-HHS-Education Appropriations Bill before the beginning of the new federal fiscal year – boosting the National Institutes of Health’s budget by $2 billion in the process.   Congress sent five of the 12 annual spending bills for FY 2019 to the President’s desk before the start of the new fiscal year – including the Defense, Energy & Water and Military Construction-VA spending bills – all of which contain programs that support the work of CU faculty.  The bills also contained a continuing resolution to maintain the current levels of funding through December 7th for all agencies not included in the five appropriations bills that were signed into law.  The Commerce-Justice-Science appropriations bill, which funds NSF, NASA, NOAA and the National Institutes for Standards and Technology (NIST) will have to wait for Congress' return after the election – as will a number of other appropriations bills.

With the addition of $2 billion in new funding for NIH in FY 2019 (a 5.4% increase), Congress has now added $9 billion to NIH’s annual budget since FY 2016. Over that time NIH’s base budget has increased from $30.3 billion to $39.1 billion – a 29% increase over four years.  On an inflation-adjusted basis, these steady, sustained increases have restored much of NIH’s purchasing power, which had been diminished significantly by inflation during a decade of flat funding and sequestration prior to FY 2016.