CU-Boulder Chancellor DiStefano hosted a series of outreach events around the state in August to showcase the far-reaching impact of the CU-Boulder campus. During the Fort Collins, Carbondale and Grand Junction events, the Chancellor, campus representatives and local community members were welcomed by state legislators including Representatives Jeni Arndt (D-Fort Collins), Bob Rankin (R-Carbondale), and Yeulin Willett (R-Grand Junction). The events were well received by the legislators and community members and highlighted CU’s local impact in communities across the state.

In July and August, the University of Colorado joined the Colorado Space Business Roundtable as it toured the Northeast and Southeast sections of the state to promote Colorado’s aerospace industry and make connections with local communities and business. Scott Palo, Associate Dean for Research in CU-Boulder’s Aerospace Engineering Sciences, and Maura Schneider from CU-Boulder’s Aerospace Ventures joined the tour and highlighted CU’s Aerospace programs while making connections with educational and business partners throughout the Eastern plains. The Denver Post also highlighted the success of the tour, which can be found here. 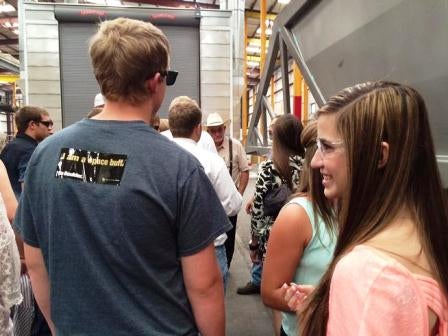 U.S. Senator Cory Gardner visited the CU-Boulder campus on July 6 for the first time since being elected to the Senate. The visit included meetings and discussions aimed at educating the Senator about the breadth of federally-funded research conducted on campus and its importance to Colorado and the nation. Due to Senator Gardner's position on the Commerce, Science and Transportation Committee, he will play a key role in shaping policy that directly impacts CU-Boulder's researchers.

Congressman Mike Coffman toured the UCCS campus on August 28. The tour focused on how the UCCS campus supports the veteran and active duty community in Colorado Springs, including veteran and military student support and services provided by the Veterans Health and Trauma Clinic on campus. Given Coffman’s seat on the House Veterans’ Affairs Committee, the tour and meetings served as an important opportunity to highlight UCCS’ work with veterans with one of the nation’s veterans’ policy leaders.

In addition to Congressman Coffman and his staff, Board of Regents Chair Kyle Hybl and Regent Sue Sharkey attended this informative tour and discussion. UCCS will continue to work with Coffman to ensure that veteran and military students continue to receive the best support possible. 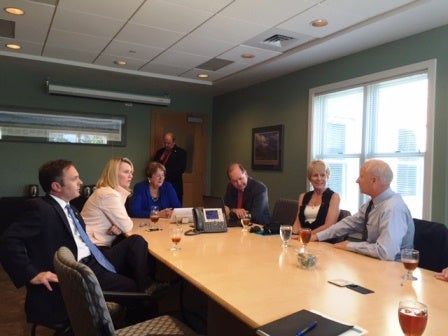 Kent Springfield, Assistant Vice President of Research and Federal Relations with the Office of Government Relations joined Dr. Mark Deutchman, who oversees School of Medicine Rural Track (CU Anschutz) on a state-wide tour to educate local Congressional offices about the Rural Track’s impact on rural Colorado.  The aim of the Rural Track program is to increase the number of physicians who enter and remain in practice in rural Colorado.  The tour included stops in Grand Junction, Pueblo, and Castle Rock, to meet with Congressional staff from the offices of U.S. Senators Bennet and Gardner and Representatives Tipton and Buck.

China Delegation Hosted by Chair Hybl at CU in DC

University of Colorado Regent Chair Kyle Hybl hosted a delegation from China at the CU Office of Government Relations’ Washington, DC Office on September 9. The Chinese delegation was on exchange to the U.S. as part of the American Council of Young Political Leaders (ACYPL), a program designed to introduce next generation leaders to governance, politics, policy making, bilateral relations, history, culture, and geographic diversity of countries around the world. The delegation hailed from a variety of industries including the All-China Youth Federation, Anhui Provincial Youth Federation, People’s Daily newspaper, and the Ministry of Finance.

Chair Hybl discussed current CU partnerships with China across its campuses, which was well-received by the visiting delegation, as they learned more about the important relationships CU has with Chinese academic institutions.

U.S. Senator Cory Gardner is the co-leader of the working group with Senator Gary Peters (D-MI) that will lead the America COMPETES Act reauthorization effort in the U.S. Senate. As part of this effort, the Senator held several roundtables where the University of Colorado was well-represented. The discussions were held to inform Senate policy priorities for the reauthorization of the COMPETES Act, legislation authorizing research, engineering, and Science, Technology, Engineering, and Mathematics (STEM) education programs at the National Science Foundation, the National Institute of Standards and Technology, and the Department of Energy’s Office of Science.

CU-Boulder Provost Russ Moore participated in a roundtable with members of the Senate Commerce, Science and Transportation Committee on “Maximizing the Impact of Basic Research” in Washington, DC. The conversation was an open discussion where several themes emerged including the need for aspirational and stable funding; the role of universities in preparing the next generation of scientists; protecting merit-based, peer review; sustaining a research “ecosystem” through multi-disciplinary research; and, a combination of both large federal initiatives and small, independent awards.

CU-Boulder’s Vice Chancellor for Diversity, Equity, and Community Engagement, Robert Boswell, and the CU-Boulder Executive Director of Student Success, David Aragon, participated in another stakeholder discussion held in Denver regarding STEM education provisions in the America COMPETES Act. Other participants included representatives from industry and Colorado institutions of higher education.