University of Colorado Cancer Center Director, Dan Theodorescu, along with Associate Director for Administration and Finance, Mark Kochevar, awarded Congresswoman Diana DeGette with the American Association of Cancer Institute’s (AACI) “Champion for Cures” Award.  The award recognizes both Congresswoman DeGette and Congressman Fred Upton (MI) for their leadership in writing and securing House passage of the 21st Century Cures Act. The bill seeks to bring new cures and therapies to market faster by streamlining the government’s role in the process of discovery, development and delivery of medical innovations.

The 21st Century Cures bill, which passed the House in July with a bipartisan vote of 344-77, would create a mandatory funding stream for the National Institutes of Health (NIH) and the Food and Drug Administration (FDA) so they could invest in emerging scientific fields.  That mandatory funding would provide an $8.75 billion boost to NIH over five years – funding the lifesaving work of faculty throughout the CU System, and particularly at CU Anschutz. The NIH “Innovation Fund" would target additional support to young investigators, “high-risk, high-reward” research, and investigator-driven proposals, among others.

The legislative push by Congresswoman DeGette and Congressman Upton is also credited with helping to kick off a national conversation about the need to provide additional funding for NIH.  That conversation contributed to a decision by members of the House and Senate Appropriations Committees to provide a $2 billion (6.6%) boost to NIH’s budget for FY 2016 in the regular appropriations process, part of the omnibus recently passed into law.  That additional funding is the first step in reversing a decade long trend of flat or declining budgets for NIH that have eroded the agency’s purchasing power by approximately 22%.

In a meeting with Congresswoman DeGette, Theodorescu, Kochevar, AACI Board Chair George Weiner, and AACI Executive Director Barbara Duffy Stewart discussed the best ways to advocate for 21st Century Cures in the Senate. Similar legislation is expected to be introduced early this year in the Senate Health, Education, Labor and Pensions Committee.

We greatly appreciate Congresswoman DeGette’s leadership in support of biomedical research, and look forward to working with her to help get a final bill to the President’s desk later this year.  We also appreciate all of the members of the Colorado delegation who joined the Congresswoman to vote for the legislation in the House – Congressman Mike Coffman, Congressman Ed Perlmutter, and Congressman Jared Polis. 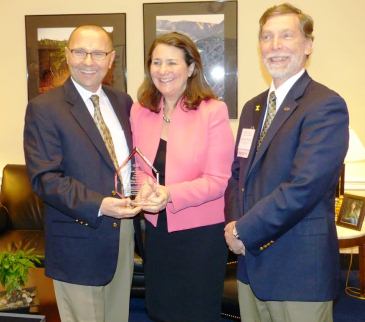