On April 20, Dr. Brian Agrow, Director of the Research and Engineering Center for Unmanned Vehicles at CU-Boulder, along with one of his drones, came to the state capitol and gave a lunchtime presentation to legislators and legislative aides on Unmanned Aircraft Systems and the work being done by his department across the state and nation. 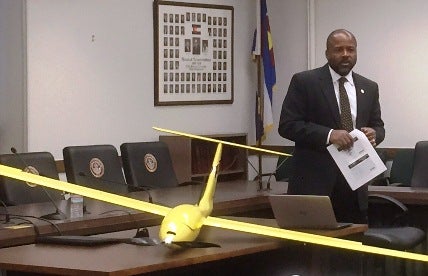 Dr. Brian Agrow, Director of the Research and Engineering Center for Unmanned Vehicles at CU-Boulder

On May 4, Congresswoman Diana DeGette attended a roundtable discussion hosted by the CU-Boulder BioFrontiers Institute on the 21st Century Cures Initiative, which is being co-led by the Congresswoman. The 21st Century Cures Initiative is a bipartisan effort to take a comprehensive look at steps that can be taken to accelerate the pace of cures in America from basic science and streamlining the drug and device development process, to unleashing the power of digital medicine and social media at the treatment level. During the discussion, Congresswoman DeGette was able to share her work on the Initiative as well as hear from local leaders from industry, academia and research on ways to further streamline healthy outcomes.

More information, including the discussion overview, can be found here.

This spring, the CU Office of Government Relations submitted programmatic requests to members of Colorado’s congressional delegation outlining the University’s federal priorities for Fiscal Year 2016 (FY16). The primary goal of this effort is to encourage our congressional delegation to support these programs by joining other Members of Congress in sending letters urging House and Senate appropriators to fund these programs for the upcoming fiscal year.  This year, we received a lot of support from our delegation, who joined in signing letters of support of many of these agencies/programs, including: