May 9, 2018 marked “sine die,” the final day of the 2018 state legislative session. This year almost 800 bills were introduced, a record number. Many of the bills introduced had major state-wide policy implications which generated complex, passionate, and at times politically charged discussions. The sexual harassment issues tainted the mood at the Capitol this session but it was one of the best funding years ever.

Of particular importance this session were several bills aimed at alleviating the significant budget challenges in our state, including transportation, broadband access, and the Public Employees Retirement Account (PERA). With the surplus of state funding available, legislators and stakeholders were able to spearhead unique initiatives to address key issues in Colorado. CU engaged in several of these by leveraging the critical work being done by faculty and staff at all four of our campuses in the areas of cybersecurity, educator shortages, opioid addiction and more.

Additionally, in an effort to promote the Universities’ endeavors, we engaged CU stakeholders in many activities at the Capitol including faculty presentations to committees, hosting campus groups for tours and legislator briefings, and hosting legislative events such as CU Advocacy Day.

Below is the 2018 legislative recap on the major issues impacting CU. Please visit this page for a full list of bills and links to bill text.

HB18-1003 Opioid Misuse Prevention (Pettersen/Priola, Jahn): This bill was one of six bills that the Opioid Interim Task Force introduced after months of stakeholder meetings and research. Section 6 directs the Center for Research into Substance Use Disorder Prevention, Treatment, and Recovery at the University of Colorado Anschutz Medical Campus to develop and implement continuing medical education activities to help prescribers of pain medication to safely and effectively manage patients with chronic pain, and when appropriate, prescribe opioids. The bill appropriates $750K to the Center. This bill was signed by the Governor on May 21.

HB18-1309 Programs Addressing Educator Shortages (Coleman,Wilson/Hill): This bill creates initiatives to address teacher shortages by requiring the Colorado Department of Education and the Colorado Department of Higher Education to create a framework for a “Grow Your Own” educator program which will provide tuition stipends in teacher preparation programs for up to 50 students who will teach in rural areas upon graduation. Additionally, the bill appropriates $75K each year for two years to CU Denver’s School of Education to develop targeted customized solutions with educator stakeholders and report applicable data to the state. This bill was sent to the Governor.

Bills with Fiscal Significance for CU:
SB18-001 Transportation Infrastructure Funding (Baumgardner, Cooke/Buck,Winter): This bill provides General Fund support for transportation project construction and maintenance. The amount of funding and the purposes for which it may be used depend on the outcomes of different ballot measures, including citizen-initiated measures in 2018 and, conditional on those measures not passing, a 2019 ballot measure referred pursuant to this bill. This bill was sent to the Governor.

SB18-002 Financing Rural Broadband Deployment (Coram, Sonnenberg/K. Becker, Duran): This bill phases in additional funding from the High Cost Support Mechanism (HCSM) to support broadband deployment grants and makes changes to the Broadband Deployment Board's membership and grant application process. It also repeals the Public Utilities Commission's oversight of the HCSM on September 1, 2024, following a sunset review. The bill creates a minimal one-time state workload increase, and may increase revenue to local governments on an ongoing basis. Many CU Anschutz Medical Campus faculty were actively engaged in supporting this bill because of its effect on telehealth. This bill was signed by the Governor on April 2.

Over the entirety of the session we worked strategically with leadership in both chambers as well as the bill sponsors Senators Tate and Priola and Majority Leader Becker and Pabon on this critical bill.  CU has over 8,600 PERA employees, and CU lobbied the bill with great intensity as the teachers union lobbied against it. Ultimately, CEA agreed to all of the changes in the bill with one exception.  They were willing to agree to a retirement age increase to 63 years for new hires but the compromise bumped it up to 64.  Contrary to CEA, Colorado’s other labor union organizations did not attempt to kill the bill even though they also did not get everything they wanted.  Several conservative leaning organizations also came together to support the final compromise while a small number never agreed.

Following is a summary of the major provisions of SB 200:

SB18-280 Tobacco Litigation Settlement Cash Fund Transfer (Lambert/Hamner): We asked the Joint Budget Committee to run legislation to make up the shortfall in the tobacco settlement revenues. This year, we are approximately $19 million short and the CU Anschutz Medical Campus receives a large portion of these funds. SB18-280 helps alleviate this shortfall by transferring $19,965,068 from the General Fund to the Tobacco Litigation Settlement Cash Fund and requires this money to be disbursed to state agencies consistent with the current law allocation formula for Tobacco Master Settlement Agreements payments. This will make the expected allocation to CU Anschutz whole. This bill was sent to the Governor.

HB18-1189 Expanding Effective Teacher Residency Programs (Pettersen, Sias/Hill, Todd): The Colorado Educator Preparation Innovation Coalition, which our Education Deans are a part of, conceptualized this bill that creates a teacher residency pilot program. The pilot program will help to bring local education providers and teacher preparation programs together to ensure that prospective teachers are ready to thrive in the classroom environment. The bill appropriates $600K for the grant program, which will be spent on 6 pilot programs over 3 years. It requires a 1:1 private match and we are pleased that the Rose Community Foundation voted to provide a $200K match. This bill was sent to the Governor.

HB18-1437 Costs of College-level Courses in Corrections Educational Program (Herod/T. Neville): This bill, supported by CU Denver, allows costs of college-level courses offered to prisoners to be borne through private, local, or federally funded gifts, grants, donations, or scholarships. Faculty from CU Denver’s College of Liberal Arts and Sciences are actively engaged in providing education courses to prisoners throughout the state. This bill will help attract much needed private funding to support efforts to offer these courses for actual credit. This bill was sent to the Governor.

Bills with Major Policy Impact:
SB18-069 Enforcement Statewide Degree Transfer Agreements (Holbert, Zenzinger/Garnett, Becker J.): Institutions may only require an eligible student to complete lower-division courses if the courses are part of the student's major, and taking the courses does not require the student to take more credit hours or time to complete the degree than a non-transfer student. The institution may not require that eligible students take additional general education courses. For any lower-division courses that result in a student exceeding the total credit hours or time to completion that is required for a non-transfer student, the institution is required to pay the full cost of the courses, before the application of the College Opportunity Fund. This bill was signed by the Governor on March 22.

SB18-237 Out-of-Network Providers Carriers Required Notices (Gardner/Esgar): This bill requires health insurers to cover emergency services as an in-network benefit and makes other changes regarding out-of-network billing and disclosures. This bill focused on the notification of patients about their rights regarding medical bills. However, the bill was killed in committee. Stakeholders agreed to work on a late bill to address concerns about the patient notification provision, but an agreement could not be reached before the deadline for this session. The bill sponsors and stakeholders have agreed to continue working on this issue in the 2019 session.

HB18-1006 Infant Newborn Screening (Hamner, Liston/Gardner, Moreno): The bill updates the Newborn Screening law for the first time in 20 years following a collaborative effort led by Children’s Hospital, pediatricians, audiologists, the March of Dimes organization, and the Colorado Department of Public Health and Environment. Many CU School of Medicine faculty were engaged in the process as well. The department is authorized to assess a fee for newborn screening and necessary follow-up services. The bill creates the newborn hearing screening cash fund for the purpose of covering the costs of the program. This bill was sent to the Governor.

HB18-1086 Community College Bachelor Science Degree Nursing (Buckner, Lundeen/Neville, Aguilar): HB18-1086 allows community colleges to offer stackable, four-year Bachelor of Science degree programs in nursing. We were able to add amendments in the House that narrowed the bill to a completion degree rather than a full blown 4-year degree, which would have created a complete change to the community colleges’ role and mission. CU will continue to work with its community college partners to strengthen the nursing pipeline and provide quality education and clinical placements for Colorado’s next generation of nurses. This bill became law without the Governor’s signature.

HB18- 1391 Sexual Misconduct in Higher Education (Duran, Winter/Martinez-Humenik, Kerr): The introduced version of this bill reflected a compromise developed after months of negotiations between institutions of higher education and the Colorado Coalition Against Sexual Assault (CCASA). The bill would have required institutions to have a transparent policy on sexual misconduct that included, at a minimum, information on reporting and investigation processes. The bill also required institutions to use preponderance of the evidence as the evidentiary standard. Several amendments were added to the bill by the Senate Finance Committee that would have required an unfunded overhaul of current investigation processes and procedures on Colorado’s campuses. Both CCASA and many of the institutions opposed the amendments and the bill ultimately died in the Senate Appropriations Committee.

Special thanks to Chad Marturano for his excellent work lobbying projects.

Thank you to everyone at CU who helped provide feedback on bills, testified before committees and engaged with legislators. Your efforts helped make this a successful session for CU and we appreciate your advocacy. We would particularly like to thank the Regents, President Benson and Chancellors who engaged with key legislative contacts and lobbied for CU this session. Also, special thanks to Vice President Todd Saliman and his team of Chad Marturano, Celina Duran and Cheri Gerou; Vice President Pat O’Rourke and his legal team: Jeremy Hueth, Erica Weston, Julie Steeler and Krystal Knutson as well as our campus legislative liaisons: Tobin Bliss, Neil Krauss, Mark Zamora, Kirsten Schuchman and Jia Meeks. We also had a great group of champions at the legislature on both sides of the political aisle and we are grateful for their support. 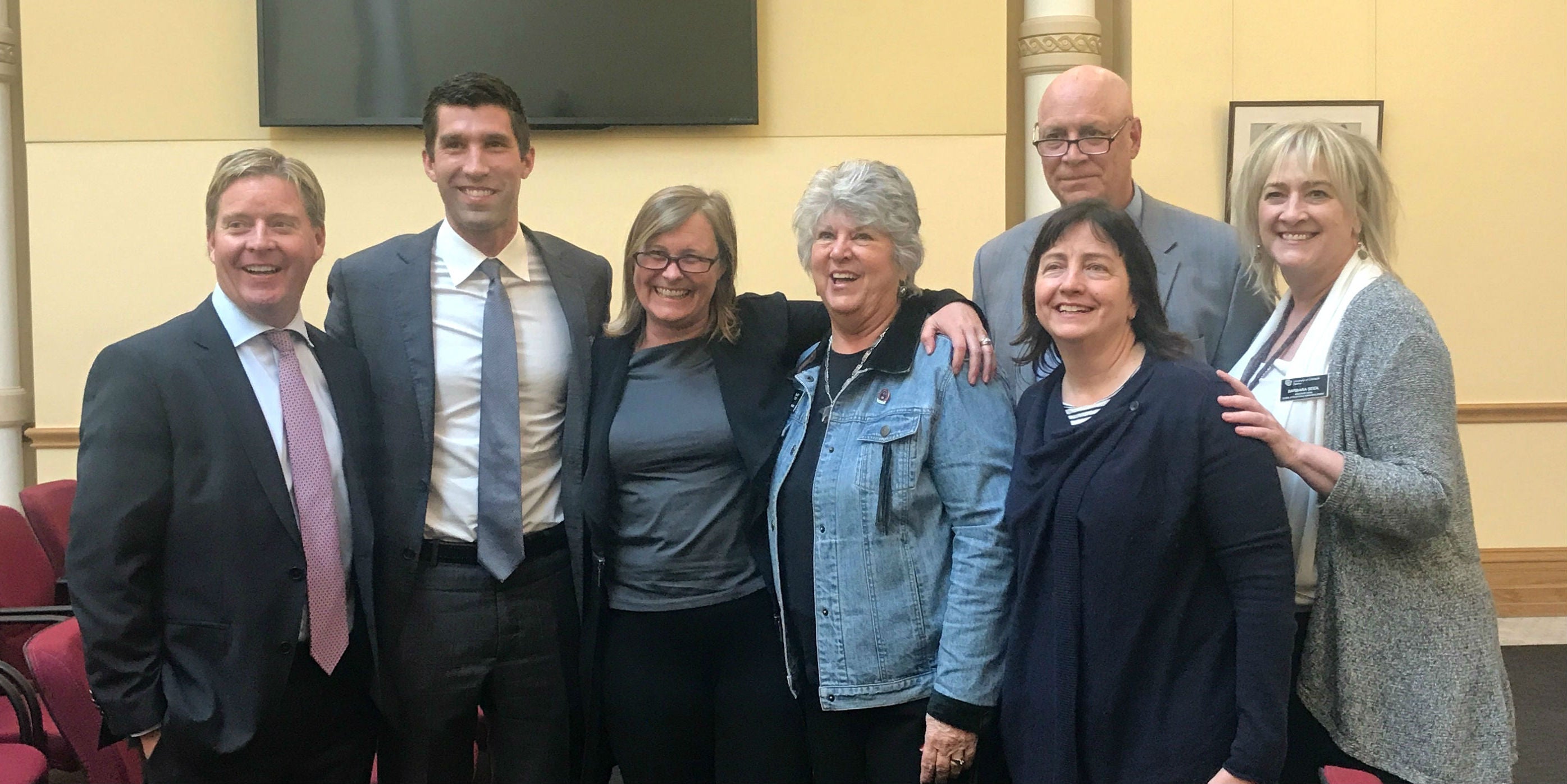