CU School of Medicine students on the right track: the Rural Track

Students in the CU School of Medicine’s Rural Track present about their summer preceptorship experiences in small communities after returning to the CU Anschutz Medical Campus to resume their second year of classes.

​Although they work in widely distributed Colorado communities and have varied experiences, the five who presented on Aug. 26 provide a good representation of what they got to see and do. 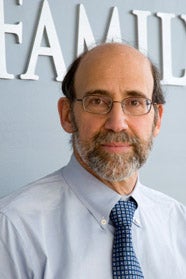 “The summer rural preceptorship is a formative and inspiring part of the School Of Medicine’s Rural Track,"said Mark Deutchman, M.D., director of the Rural Track.

For this experience, students between Phase I and II are ‘joined at the hip’ with a rural physician for four to eight weeks and return – usually reluctantly – for Phase II classes, but are energized by the real-life experiences they had during the summer. They have an additional opportunity to spend three or more months in rural practice during their third and fourth years which reinforces their confidence and increases the likelihood that they will choose rural practice at the end of their 7 or more years of training.” 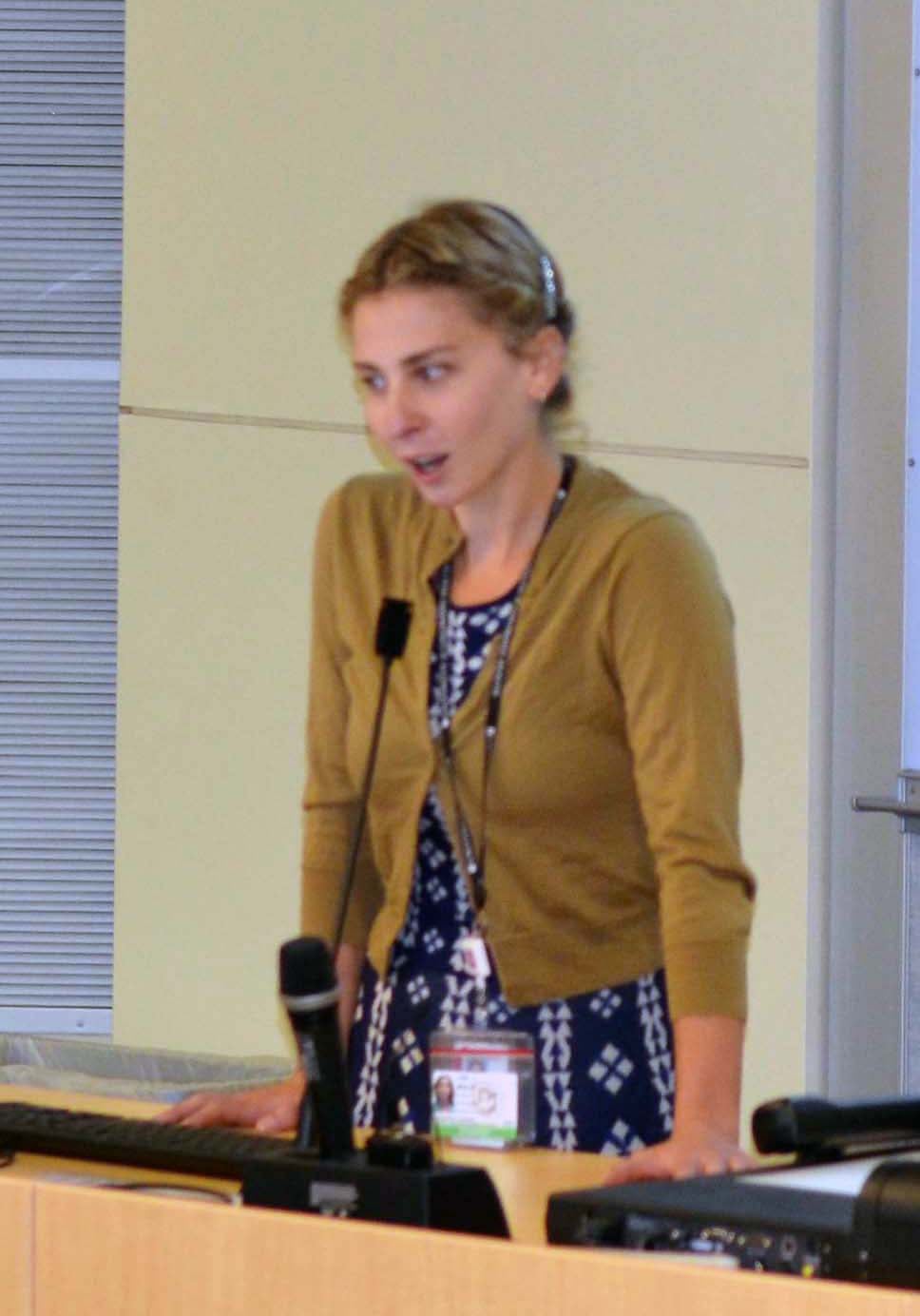 Lisa Wolff, right, did her preceptorship with husband-and-wife doctors who had recently taken over at the Gunnison Valley Hospital Family Medicine Clinic.

“This is an area where they drive cattle, mow hay -- that’s pretty frickin’ awesome I think,” Wolff said. “They were super awesome, good people.”

One of the greatest challenges she and the new doctors faced in Gunnison was caring for patients with chronic pain.

“I used a lot of communication skills. People came in with a laundry list of ailments and we couldn’t accommodate them,” she said. Many were accustomed to relying on medication. “Doing what the patient wants isn’t always what the patient needs.”

Along with learning the value of putting family first, Wolff had a huge takeaway: “When a rancher says they’re in pain, listen. They’re resilient and tough and when they do come to you for help, they really need it.”

“The scope of rural primary care is humbling: OB, ER, hospital clinic, and more” she said. 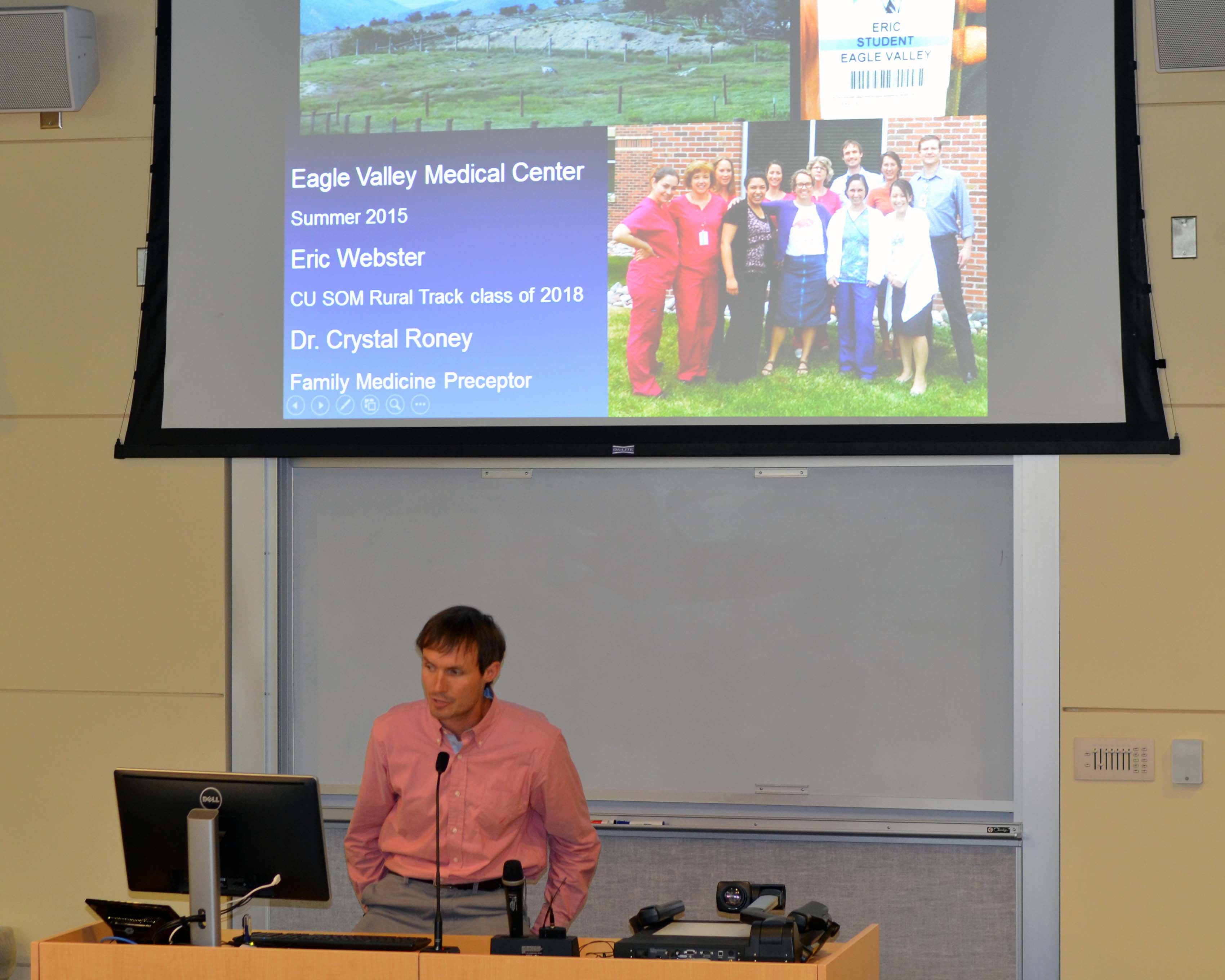 Eric Webster, left, who conducted his preceptorship in Eagle, concluded the same.

“In family medicine you’re seeing patients of all ages: newborns to elderly patients and hospice,” he said.

In one day, Webster saw an average of 30 patients with needs ranging from a colposcopy and biopsy, rash, areolar lump, ovarian exam and well-child checks. 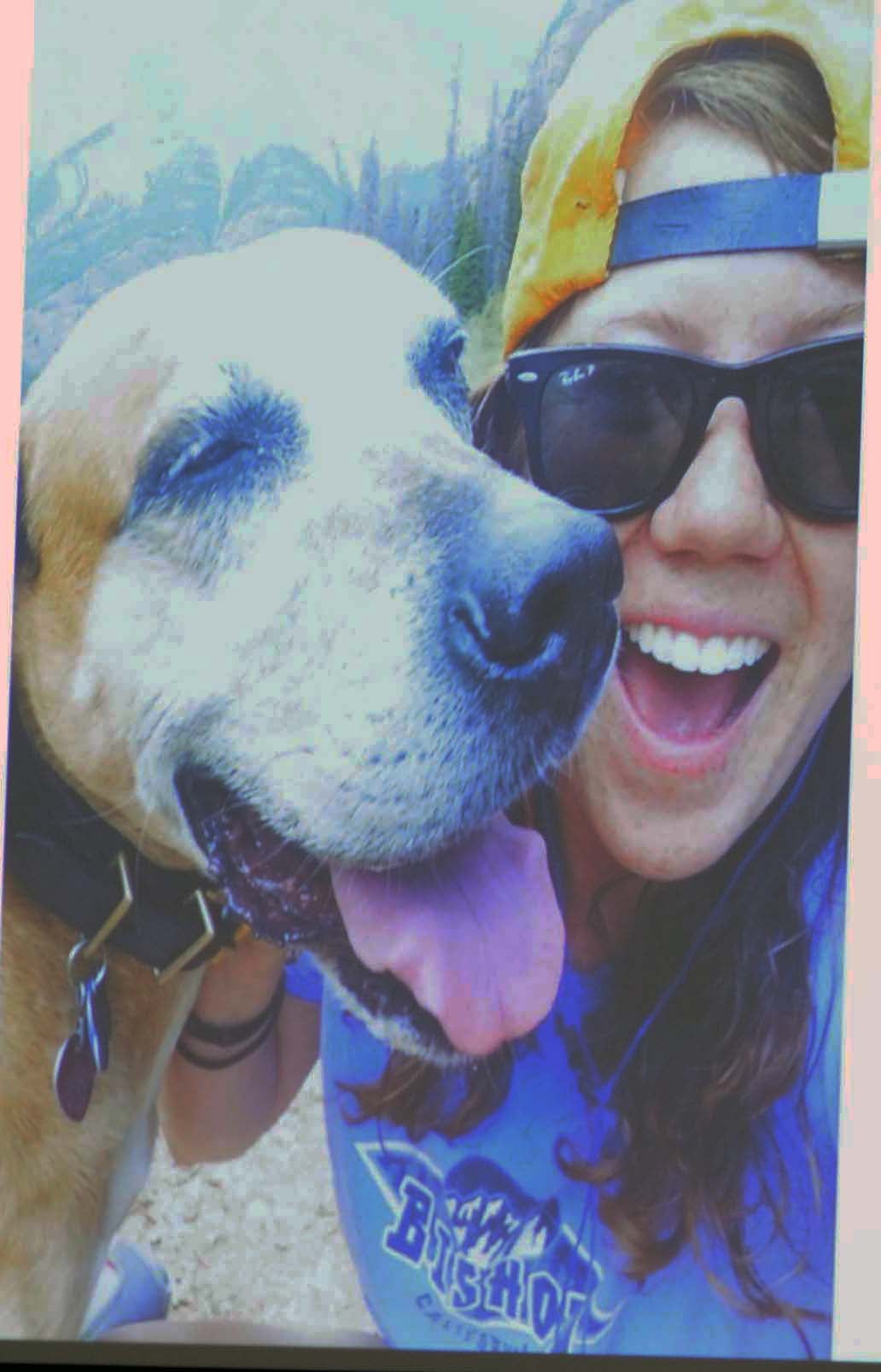 “It was a broad scope. We were able to do more than I expected,” she said.

Sargent had the benefit of working in two communities with different geography, demographics and economies, but said she found that the same biggest takeaway lesson:  the importance of making patients partners in their health care. “You could tell the doctor-patient relationship was huge,” she said.  “Being the patient’s advocate is a really important thing.”

In addition to seeing many and varied patient problems, the students said the same three words again and again: “I got to . . .”

“I got to do a colonoscopy.”

“I got to do an excision biopsy.”

That students in the program put those three words before procedures most folks wouldn’t want to observe let alone assist with speaks volumes to their “can do” spirit and their future in becoming rural doctors  in Colorado.

There are only about 30 medical schools in the U.S. (out of 160-plus) that have a Rural Track, and CU is a national leader, said Deutchman. Two-thirds of Colorado’s counties are rural or frontier areas, and while 16 percent of Colorado’s population lives in rural areas, only 9 percent of the state’s physicians practice there, he said.

“Our goal is to increase the number of CU School of Medicine graduates who enter, and remain, in practice in rural areas of Colorado,” Deutchman said.

“We attract and admit students interested in rural life and work. Each year, we have about 10 percent of each med school class in the Rural Track.” 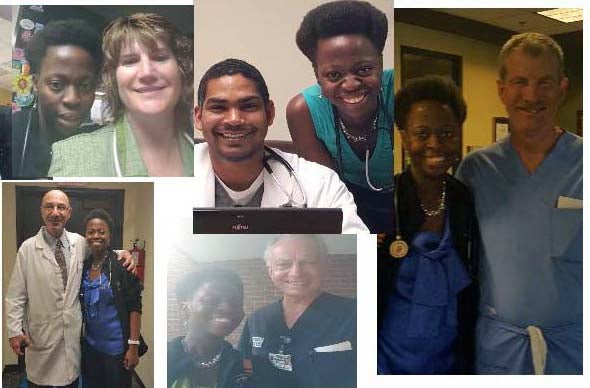 At the outset of her presentation to peers and other observers, Kisang admitted to being burned out in med school, wondering why she was there. “I felt I just needed a grade.”

“I hope I can go back and help. I really liked it there.”

Kisang saw patients in the clinic and hospital all day, noting the community needed greater support in combating obesity and mental illness.

“Of every patient I saw, 98 percent had insomnia, depression or anxiety. And I saw a lot of patients,” she said. Better access to mental health and education on healthy habits, along with walking and bike trails, would benefit the community, she said.

Kisang said she surprised herself by being able to retrieve the knowledge she’d learned in her first year classes.  “I remembered a lot of things; I just couldn’t remember how I remembered.”

Of all her experiences, however, one incident stands out: “The Curious Case of Mr. C,” in which she reports in all caps that she got to “SAVE A LIFE.” 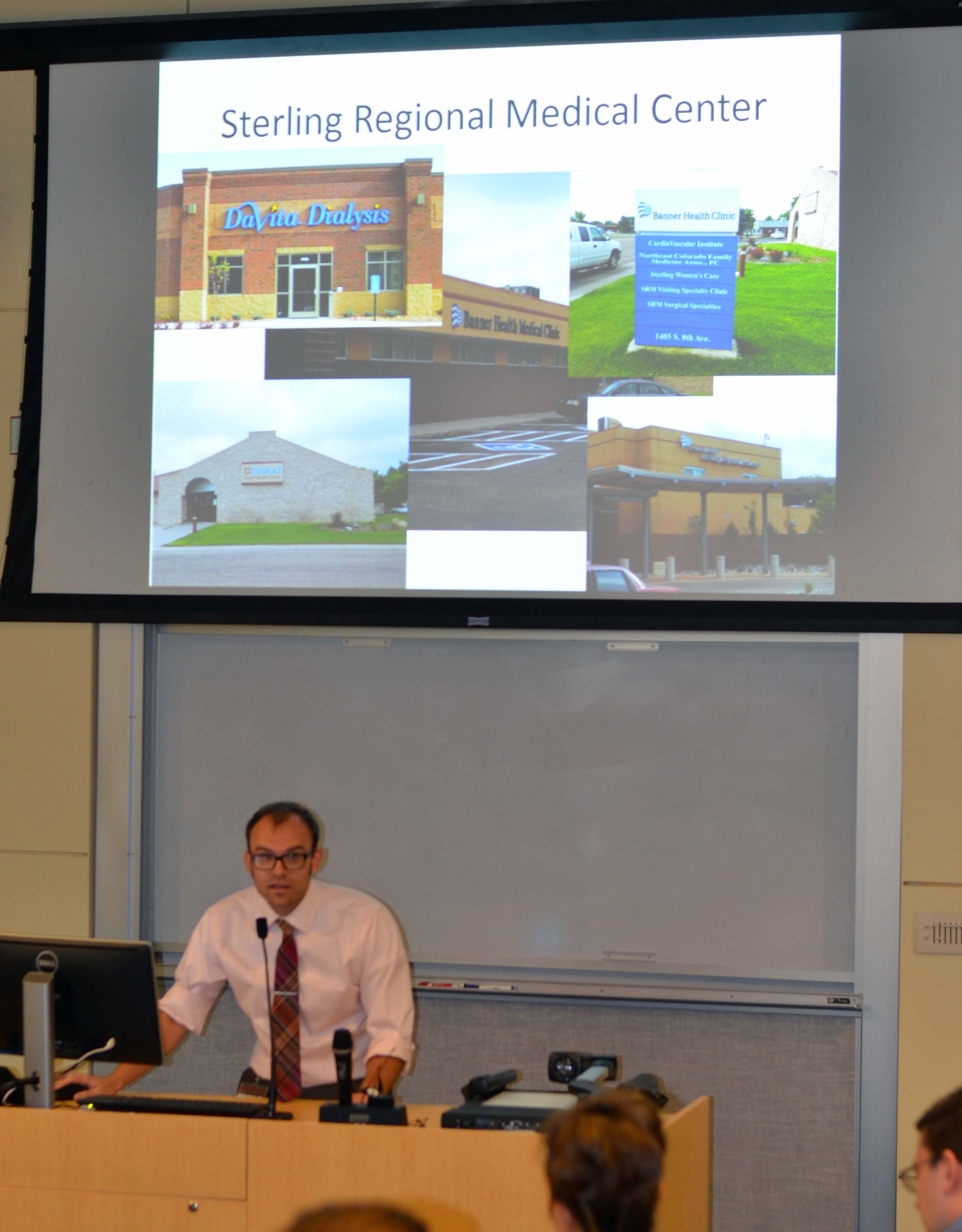 The 81-year-old patient came to the ER with myriad health concerns; he’d had hypertension for years and a colonoscopy revealed colon cancer that had metastasized in the liver. After the surgery to take a “huge chunk of his colon” out, Kisang was charged with doing rounds on him. She recognized the patient was having “crackles” as she called them, disrupting his breathing (also known as rales or pulmonary edema). Because of her finding, the patient quickly received the treatment he needed, stabilized and she continued to participate in his care. .

“He was at the hospital five weeks and I got to care for him every day.”

The presenters shared their observations about the greatest needs in their communities. Chris Moreau, left, who conducted his preceptorship in Sterling, said staffing was a problem. “The nurses and P.A.s seemed overworked,” he said.

Among his many lessons, Moreau got to take part in an excision biopsy, hip and knee replacements and a colonoscopy. “It feels really good when the patient walks out of the office all happy and healed and stuff,” he said.

“It was far and away one of the best experiences in medical school so far.”

Deutchman said that all the CU Anschutz health professions programs are greatly indebted to the hundreds of health practitioners across the state who give immeasurable time to provide CU students with this important experiential learning.