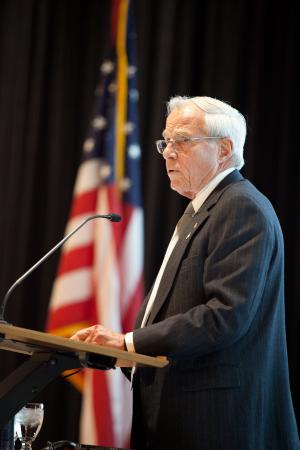 Benson, who earned a geology degree from CU in 1964, has been president since March 2008. He is the longest-serving CU president in 65 years.

“It has been my honor and privilege to serve as president of my alma mater for the past decade-plus,” Benson said. “CU is among the top universities in the world and has a bright future. The university advances the economy, health and culture of our state every day, and I’m proud of the work we’ve done to ensure it is one of Colorado’s most important public assets.”

“Bruce Benson has been one of the most effective presidents in the university’s storied history and the mark he leaves on CU and our state will endure for some time,” said Sue Sharkey, chair of the CU Board of Regents. “His passion for education, commitment to diversity of all kinds, business acumen and outstanding leadership have CU well-positioned for a bright future. Bruce is a true friend and mentor in the art of leadership, not only to me, but also to many who have known him.”

During the 10-plus years of Benson’s tenure, CU has seen considerable success in annual measures.

“CU’s success has been a team effort and I have been fortunate to work with some great people, from faculty and staff to campus chancellors and my executive team,” Benson said. “Together, we’ve improved the culture, enhanced collaboration and increased diversity in all its forms. CU has programs and people in every corner of Colorado and we’re proud of what we do every day to improve the state that was founded the same year as the university.”