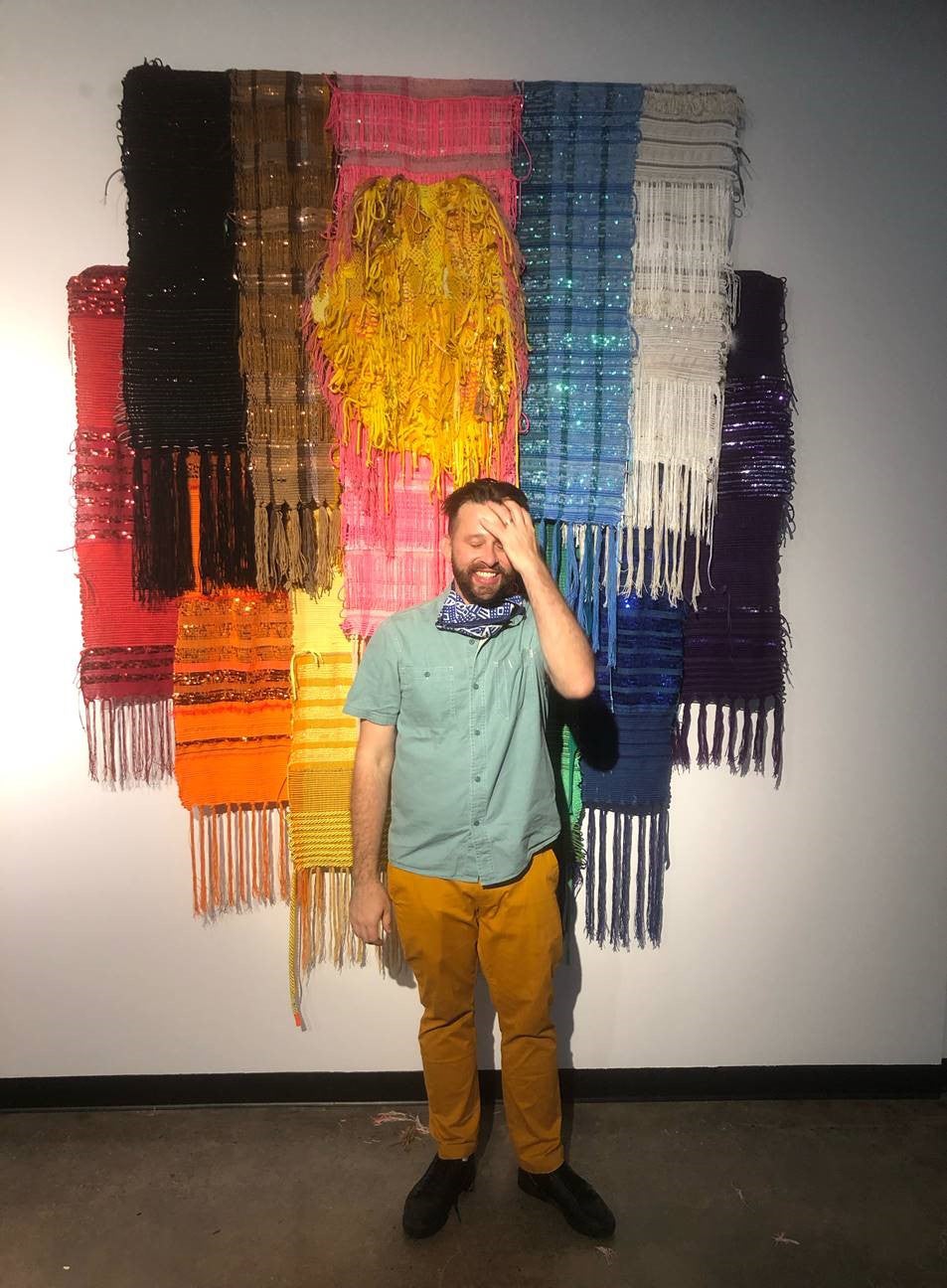 To call Steven Frost a master weaver may seem like stating the obvious. One need only see his work – including his piece, “The Mile High Pride Flag,” created for Denver’s 2020 Pridefest celebration – to recognize his virtuosic technique with textiles.

Dig a little deeper, however, and Frost’s mastery at weaving his many sources of inspiration into his work – people, places, narratives and histories – comes into sharp focus.

“The white on the flag is from last year’s CU Pride t-shirt, the blue is from one of my husband’s shirts, the green from one of my dad’s shirts,” Frost said, describing some of the materials used in making “The Mile High Pride Flag.” “In queer culture we often use reflective materials in celebrations. Part of it is to take up space, to be present. Disco balls and sequins project your presence, so it becomes a performance via a static object. That served as inspiration too.”

An instructor in CU Boulder’s College of Media, Communication and Information, Frost’s work – and the media in which he works – is as varied as his sources of inspiration. Describing himself as a “fiber, new media, performance, and installation artist,” his art encompasses video, live performance, workshops, sculpture and printmaking. But for Frost, textile-based work – weaving and sewing – resonates loudest.

“When people see art made from textiles, they relate to it in a visceral way,” he said. “I think there’s a transition in our culture where we’re seeking things that have texture, history and memory. There’s a long tradition of people working in textiles, including women and people of color, who often made their work in isolation due to their gender identity and their place in society. Even when I’m working alone, I think about those histories and techniques. So, I always feel like I’m collaborating with a larger narrative.” Collaboration is key to Frost, who hosts monthly gatherings of the Colorado Sewing Workshop at the Boulder Public Library in addition to working with other artists. “I’m really interested in what it means to make and grow as an artist inside of a group of people that maybe has broader or different interests,” Frost said. “When I collaborate, I want to make something I couldn’t make as Steven. I want to produce work with a different voice.”

Different voices and perspectives fuel Frost personally and artistically. He cites “famous queers” like French writer and activist Jean Genet and Civil Rights leader Bayard Rustin as inspirations but is quick to add his fellow artists, the trailblazers in fiber art and his students to the list. “I love being a professor. My students push me to back up everything I say in the classroom, and to really think about what I believe and value,” Frost said.

Reflection will be a big part of Frost’s Pride celebration this year – something that began during the long and meditative process of making “The Mile High Pride Flag.” As he wove the 11 strips in his piece, Frost listened to an audio book about novelist, poet and professor Samuel M. Steward, who hid his sexual identity while teaching at various institutions in the 1930s and 1940s. “Each strip takes between eight and 12 hours, so I had a lot of time to reflect on my own experiences and the privileges I have as a queer person in 2020,” he said. “I have a great life. I can teach at CU and I don’t have to hide who I am from my students.”

While he’ll miss marching in the Pride Parade this year – and plans to organize a socially-distant “driveway disco” – Frost sees opportunity in the “safer-at-home” restrictions. “I think that self-reflection and community building are things we can do during COVID-19,” he said. “To think about global and national perspectives and what we can do to improve the experiences of people of color in our community.”

Steven Frost’s “The Mile High Pride Flag” is part of the exhibition, “Queer City of the Plains: An Artistic Look at Denver’s LGBTQ History,” which runs through Aug. 20, 2020 at the McNichols Civic Center Building. See more of Frost’s work at www.stevenfrost.com.