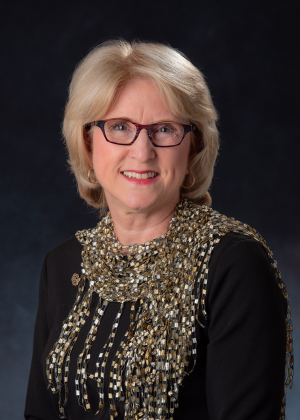 University of Colorado First Lady Debbie Kennedy is a lifelong leader and volunteer who supports all people as they pursue their educational, career and creative dreams. She has been involved with and chaired numerous community, university, church and school projects.

She has been active in the arts, particularly theater arts and textiles. She earned a bachelor’s degree from North Dakota State University in Home Economics Education and Textiles, and a MFA degree in Costume Design from The George Washington University. Her interests lie in textiles, ranging from needle arts to costume design.

Mrs. Kennedy and CU President Mark Kennedy have four children and six grandchildren living on three continents. She is strongly committed to faith, family and community.

She is a member of the Congressional Club, former president of the American Legion Auxiliary Unit 121, served on the Read Indeed Board of Directors and was an integral part of the Kennedy for Congress and Senate campaigns. While First Lady at the University of North Dakota, Kennedy served on the Soaring Eagle Prairie Garden and on the Coulee to Columbia committees and as a corporate member of the Altru Health System.

Her professional theater credits include It’s a Wonderful Life, A Live Radio Play for the Washington Stage Guild, which was favorably reviewed by the Washington Post. She designed for Back to Methuselah, Elling and Absurdities, An Evening with Ionesco in Washington, D.C. and Romeo and Juliet for the 2017 North Dakota Shakespeare season.

Kennedy was awarded the 2014 Bradley William Sabelli Design Award. She has also had museum exhibits displayed at the Smithsonian National Air and Space Museum and the Albert H. Small Washingtoniana Collection, part of the Textile Museum in Washington, D.C.