August 22, 2016 was a special day for CU as all four campuses started classes on the same day! While much preparation went into ensuring our systems were scaled properly for this massive load and ready to perform, there was some excitement as to how broadly the mobile apps would be accepted and utilized. UIS tracked the peak logins to the student portals at 3,323 concurrent users at 11:01 a.m. on the first day of classes and we had 162,044 total student portal logins over the course of that first day. That’s quite a number of transactions for CU’s nearly 60,000 students just on the first day of classes!

In fall 2014, CU introduced a new way for students to access their course records and financials. UCCS paved the way for CU to go mobile with the UCCS2GO mobile app pilot program for Apple iOS and Android devices. Following the success of UCCS2GO and the demand by students, CU Anschutz, CU Denver and CU Boulder followed in spring 2015 with CUAnschutz2Go, CUDenver2Go and MyCUInfo, respectively, and mobile capabilities took off. 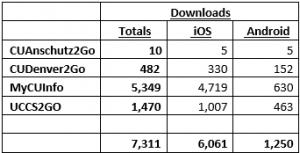 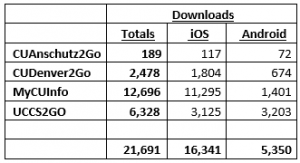 At CU Boulder alone we had 16,637 logins on the first day of classes. Assuming each student logged in three times on that first day – once to check their schedule, once to find the location of their classes and once to perform an add/drop – that would be still mean that 18% of CU Boulder’s 30,000 students took advantage of mobile functionality just on their first day! That’s a pretty exceptional statistic for mobile functionality’s second semester at school for this campus.

With student response so positive toward mobile functionality, UIS is looking forward to the next evolution of mobile design. We’re moving beyond mobile apps to responsive design that accesses our Campus Solutions portal directly, increasing accessibility for our visually impaired community and improving the student experience overall.

The strong performance of CU’s systems under this heavy load is a testament to the work and partnership that goes into each semester start preparation in the weeks leading up to the first day of classes between campus IT departments and the UIS technical teams. UIS would like to thank our staff and campus IT teams for your dedication and support that results in consistently exceptional semester start student experiences.