Cross-campus innovation and collaboration among CU IT organizations

Cross-campus innovation and collaboration among CU IT organizations

Groups from CU Boulder’s Office of Information Technology (OIT) and System Administration’s University Information Systems (UIS) came together recently to explore the skills and knowledge of working innovatively across and within our organizations. 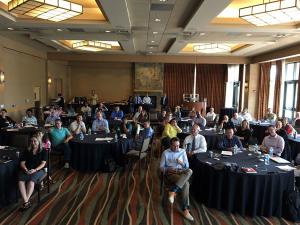 An innovation retreat was held April 6-7, 2017. 76 team members from OIT and UIS attended, participating in activities and discussions geared toward creating a shared culture of innovation and collaboration.

Organizational change expert Howard Teibel led the day and a half session, focusing on lessons from Pixar and Disney Animation’s president Ed Catmull, documented in his book Creativity, Inc.

Through lessons learned at these iconic institutions, attendees were shown how to overcome barriers to innovation by applying Catmull’s 8 mechanisms for creativity. These are:

Next Steps to Innovation

It was great that the departments came together to learn about collaborating and innovating, but what comes next? Was this just an opportunity to network, learn and go back to the status quo?

Not for these teams! Attendees dove right in to apply one of Catmull’s 8 mechanisms right off the bat – Short Experiments.

A call was put out for innovation proposals addressing real-world CU IT problems. The work had to include collaboration between the two groups and the application of two or more of the 8 mechanisms. It had to be scalable, transformative and further the campus or CU’s strategic goals. The winning proposal would receive $500 for each team member and time during work hours to complete their project.

Six teams submitted proposals. Three proposals were selected to move to the semi-finals, which were held Monday, July 17, 2017. The semi-finalists included:

Congratulations to Robot Ralphie for being the voter’s choice! The Annual Cross-Campus IT Conference had the next largest number of votes, followed by OIT/UIS Shared Database Services.

The Robot Ralphie team receives the cash and work time.

The judges determined that all three proposals were so important to collaboration between the teams they decided to fund all three!

The OIT/UIS Innovation Retreat and short experiment proposals were so successful, all four campus IT departments are already talking about how they can keep the momentum going and strengthen collaboration. And when the Annual Cross-Campus IT Conference team completes work on their proposal and presents their findings in the next few months, innovation through collaboration may become the way of life for CU IT!

Thank you to the submitting teams who did not move to the semi-finals. Here are their creative innovations.