Categorized in:
Updates and Releases

As phase two of the Marketing Cloud migration progressed, the eComm team recognized the opportunity for a process improvement that would lessen the impact of the migration for our end-users. After careful deliberation and additional research, CU's eComm Specialists elected to modify the process that had originally been communicated to users.

In the original Marketing Cloud migration plan, users were asked to conduct two stages of content review and cleanup: one for 2016 and 2017 content, and one for 2018 content. 2016 and 2017 content were scheduled to move to the migration folder during the week of January 22. However, moving 2016 and 2017 content separately from 2018 content would have resulted in a major change to the Marketing Cloud folder hierarchy that would likely have caused users to struggle to locate the content they use on a regular basis. As such, the eComm team notified users (view a copy of the email below) on Friday, January 18 that ALL Marketing Cloud content (remaining after the initial file clean-up) AND the existing folder hierarchy would move to the migration folder.

USER IMPACT: The user impact of this change is relatively small. When users log in to Marketing Cloud, they will now need to navigate to the z_migration folder in order to access their content. All new content and any modifications to existing content should occur within the z_migration folder from January 22 until each campus moves to the new eComm environment. 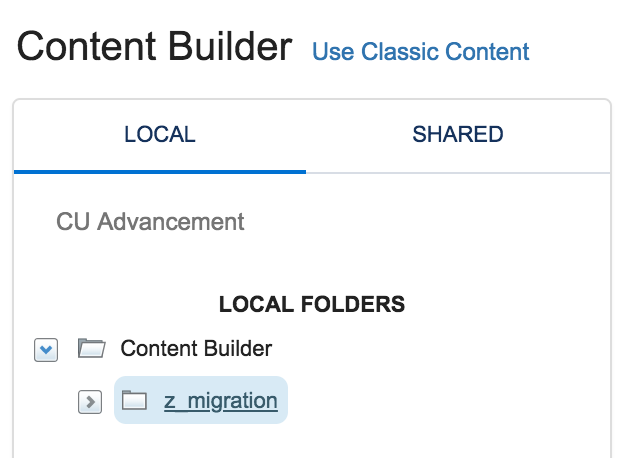 Additionally, for users who have not been engaging with communications regarding the eComm upgrade, the eComm team placed one piece of content in the general Content Builder folder called "Where is my content?" This document addresses the process change and instructs users where to go to access their content.

Another benefit of this process change is that it opens the door to an easier final migration of content created between now and each campuses move to the new org. We will now be able to conduct a quick "final sweep" of content created in the z_migration folder so that everything appears exactly as it should when users log in to Marketing Cloud with their new credentials.